Continuing on from my previous lesson we went back out to the aircraft and completed a quick walk-around, checking the fuel, oil and to make sure the aircraft hadn’t accrued any damage on the previous flight, despite flying the aircraft about 30-40 minutes prior, the checklist was followed to the letter to make sure nothing was missed and to ensure familiarity with the checklists. We got in to the aircraft and got her up and running, got the latest ATIS – to be fair it hadn’t changed a lot since we landed – taxied out to the runway and briefed on the circuit procedure again. 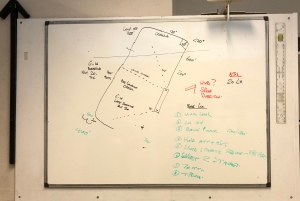 We lined up, after getting our take off clearance, applied full power and set off down the runway. A lot of right rudder and aileron were required to keep us straight down the runway, at 55kts I pulled back on the yoke to lift us off of the ground, as we started climbing the aircraft accelerated up to 60kts, climbing up to 1100ft. At 600ft above ground level, I turned the aircraft on to the crosswind leg, continued climbing up to circuit height. By this point we were turning on to the downwind leg, where we have to call the tower to say that we are on the downwind leg, complete the pre-landing checks as well as level off in straight and level flight. The first circuit we did was a little wider than we should have done. As we turned base we turned too early so were higher than what we wanted to be when we turned final, but this was quickly corrected. On the base leg we had to get the aircraft in a steady descent, trimmed, slowed down and extend the flaps, all of this happens quite quickly! On final it was a battle with the winds to keep centre on the runway. It was a successful landing, as we rolled out, we got rid of the flaps, added power and lifted off again for round 2!

Circuit 2 was much better than the first, it was a good size circuit, with very little input from my instructor, and on the approach it was controlled and the landing was very smooth. When i asked the instructor how much input he had on the controls he said he wasnt touching them, so I had landed it on my own!

Circuit 3 was very much the same as circuit 2, however on this one we discussed what we would do in the even of a missed approach or go around. So we decided that we would do a go around on this ‘landing’, as we approached the runway – it was a good approach as well! – my instructor said go around, i knew it was coming but i didnt know when. So on hearing this, I increased power to full, and pulled back initially but then pushed forward on the yoke (due to the large amount fo up trim) once the aicraft had accelerated, removed the flaps and then made the radio call.

Circuit 4, 5 and 6 were the same as circuit 2, with stable approaches, however on circuit 6 we were on final approach waiting to get our radio call in, and an aircraft was having a little trouble understanding the clearances from ATC and was taking up the radio frequency for a while, we continued the approach down to the runway, hoping to get it in before we got too low. We got our clearance to land just as we crossed the A27 – not very far from touchdown – a decision made by my flight instructor. I was prepared to perform a go around if we didnt have it in by the A27. We got our clearance and was touching down around 10-15 seconds later.

On the last ‘circuit’ my instructor took over and showed me a power off approach and landing. He brought the aircraft on to the base leg and cut the power abeam the landing runway threshold – we were about a mile parallel to the runway – he instantly turned the aircraft towards the runway and pitched for the ideal glide speed. It was weird to see the runway straight ahead of us gliding towards it. Even though ATC knew we were doing it they did make a joke to another aircraft about an aircraft on a very tight left base. As we got to the runway my instructor lined up and touched down nicely, all without adding any power. Quite impressive.

We taxied it back to stand and shut her down. We tied her down, chocked her and headed back to the breifing area to debreif and fill in the logbooks.

Published by Callum Learns to Fly

A 24 year old with a passion for flying, my views and journey on learning to fly View all posts by Callum Learns to Fly